Rakuten Marketplace: active in over 28 countries

You could call him the Jeff Bezos of Japan. Both are the heads of e-commerce companies with a huge presence in their home countries.

But to call Mikitani’s company, Rakuten, the Amazon of Japan, would ignore a fundamental difference for both sellers and end users.

“We created a real online marketplace where customers can interact with shop owners, and we empower our merchants to build relationships with their customers,” he explains, adding that Amazon doesn’t offer either experience.

Mikitani was born in Kobe, Japan, and graduated from Hitotsubashi University in 1988. While working for the Industrial Bank of Japan, he was transferred to the USA. From 1993 he studied at Harvard Business School, where he completed his MBA.

On 7th February 1997 he laid the foundation for Rakuten Japan, along with his co-founders. From the beginning he was part of the company’s management, then from 2001 the chairman.

In addition to his other titles, he is also the chairman of Rakuten Travel Inc, Crimson Football Club, a manager of PRICEMINISTER S.A.S., and of Kobo, Inc.

In March 2010, Mikitani introduced a plan he calls “Englishization”: establishing English as the main language of Rakuten, including with their employees in Japan.

Even though the plan was described as “stupid” by Honda president Takanobu, Mikitani believes in it: “English is not an advantage anymore — it is a requirement,” he says. His Englishization initiative was the subject of a Harvard Business Case Study in 2011.

In 2012, Mikitani was awarded the Harvard Business School Alumni Achievement Award ausgezeichnet, one of the highest honours the school can bestow. 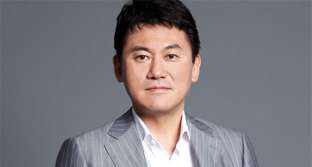